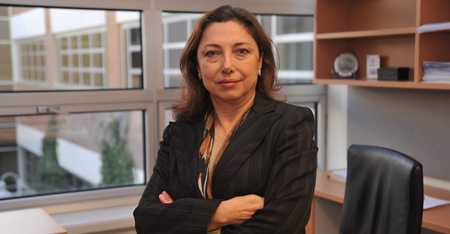 Sabancı University Corporate Governance Forum Director Melsa Ararat became a panelist at the Beijing 25+ Meeting held in Geneva on 29 October 2019 by UN Women and UN ECE (Economic Commission for Europe). More than 700 stakeholders, from young gender equality advocates, to senior government officials, met on 29 - 30 October 2019 to review the progress made in the Beijing Declaration and Platform of Action commitments, which were adopted about 25 years ago, the most visionary agenda on gender equality.

Melsa Ararat gave information about the Business Against Domestic Violence Project which is launched by the cooperation of the Corporate Governance Forum of Turkey and TÜSİAD and by the support of UNFPA and Sabanci Foundation to enable company employees to take action against the violence which they exposed to in the close relationship.

Melsa Ararat said that ‘Changing social norms and values is difficult and time consuming. The state is not independent of these values and norms. In developing their policies, many states falter between protecting women's human rights as an individual and seeing women as a fundamental element of the family and protecting “family unity”. And therefore, in many countries, women do not trust that the essentially masculine state will protect themselves. Employers, business organizations, especially in countries where trade unions are ineffective, can play an important role in addressing this lack of trust and affect balances in favor of women as an individual. The new ILO convention adopted in 2019, which defines the role and responsibilities of the private sector in the fight against gender-based violence, including domestic violence, is a crucial step.’.

The Beijing + 25 Regional Review Meeting, jointly organized by UNECE and UN Women, reviewed progress and ongoing challenges by demonstrating practical policy approaches that could help remove structural barriers that prevent women from returning to equal participation in all spheres of life. It aims to promote collaborative efforts on key issues, including equal pay, unpaid care and equal sharing in household chores, parental leave policies, the termination of all forms of gender-based violence and equal participation in decision-making. It also provided a platform for discussing how the Sustainable Development Goal 5, which aims to achieve gender equality as a critical foundation of sustainable development by 2030, has made progress towards meeting the commitments of the governments in the Beijing Declaration.

Please click here to read the speech of Melsa Ararat.