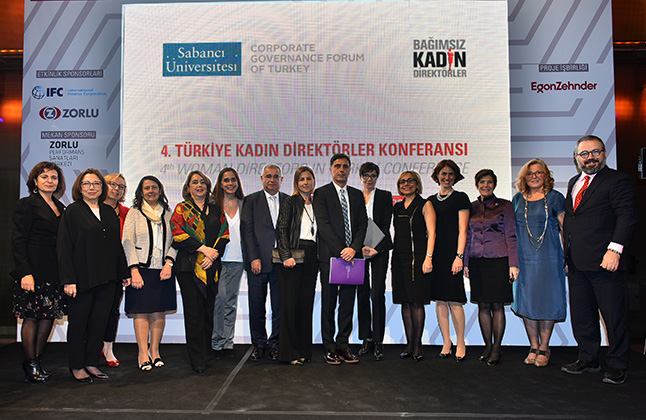 The percentage of woman directors in publicly-traded companies increased to 14.2 in 2016

The fourth “Independent Woman Directors Conference of Turkey” in association with IFC (International Finance Corporation), a member of the World Bank Group, and Zorlu Holding was held at the Zorlu Performing Arts Center on Wednesday, November 9th, 2016 as part of the Independent Woman Directors project implemented by the Sabancı University Corporate Governance Forum with the strategic support of Egon Zehnder International’s Turkey office.

The "2016 Report on Woman Directors in Publicly-Traded Companies in Turkey" was revealed to the public. According to the report, the ratio of women serving as members of the Board of Directors of companies traded on the Istanbul Stock Exchange increased from 11.5% to 14.2% in five years.

The “4th Independent Woman Directors Conference of Turkey” was held at the Zorlu Performing Arts Center on Wednesday, November 9th as part of the Independent Woman Directors project implemented by the Sabancı University Corporate Governance Forum to empower company boards of directors with the inclusion of women. During the launch of the 2016 Report on Woman Directors in Publicly-Traded Companies in Turkey, the "Boards Empowered by Women” Awards were presented with a ceremony attended by Sabancı University Acting President Professor Ayşe Kadıoğlu. 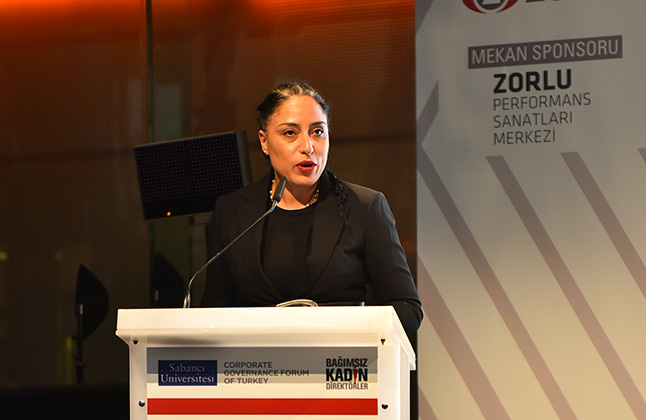 Introductory remarks were given by IFC's Regional Gender Focal Point for Europe and Central Asia, Sammar Essmat. Sammar Essmat began by emphasizing that the presence of women in executive management was one of the top priorities at IFC. Essmat said that the percentage of woman directors on boards was good news for Turkey and an important development for the private sector. Sammar Essmat also discussed IFC’s work to close the gender gap in the private sector. Essmat said that IFC had supported 18 projects in Turkey over the last year for this purpose, and stated that they wanted to achieve a shift of culture regarding gender equality on boards in Turkey. Sammar Essmat continued, “The percentage of women on boards increased, but we have more work to do. Only 5% of companies in Turkey have woman directors." Sammar Essmat concluded, “Gender equality in management improves the financial performance, investor confidence and reputation of companies."

"The ratio of women serving as members of the Board of Directors of companies traded on the Istanbul Stock Exchange increased from 11.5% to 14.2% in five years." 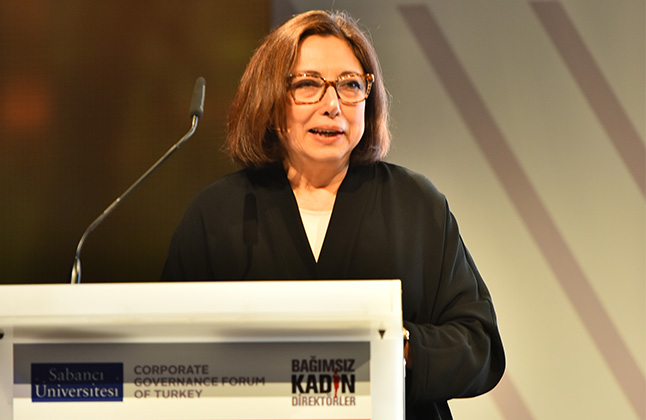 The "2016 Report on Woman Directors in Publicly-Traded Companies in Turkey" issued by Sabancı University was presented by Sabancı University Corporate Governance Forum Director Melsa Ararat. The survey covers 410 companies traded on the Istanbul Stock Exchange. The boards of 168 of these 410 companies are composed entirely of men. This number was 178 in 2015. Among 2813 directors sitting on boards, 14.2% or 304 individuals are women. 304 woman directors hold a total of 399 seats among them. These 399 chairs are filled with 224 non-executive and non-independent, 102 independent and 73 executive positions. The ratio of independent woman directors to total board members is 6.5%.

Melsa Ararat noted, "The ratio of women serving as members of the Board of Directors of companies traded on the Istanbul Stock Exchange increased from 11.5% to 14.2% in five years. Since 2012, the number of BIST companies that have at least one woman director on their boards has been slowly but steadily rising. This ratio increased from 52.9% in 2012 to 59% in 2016. Furthermore, 10% of the companies listed on BIST have at least three woman directors. According to research, based on the minority status of women on boards, there must be a minimum of three woman members on a board to become effective."
According to the findings of the report, 31 companies had a chairwoman in 2016. This corresponds to 7% of all companies. There were only 14 woman CEOs that sat on boards of directors. Accordingly, only 3.4% of publicly-traded companies have woman CEOs.

The foreword to the 2016 Report on Woman Directors in Publicly-Traded Companies in Turkey was written by International Finance Corporation's Global Manager of the Corporate Governance Group, Darrin Hartzler.

“As roles are redesigned in the new world, women have a lot to do"

Following Melsa Ararat’s presentation, the keynote of the conference was delivered by IBM Türk Managing Director Defne Tozan. Defne Tozan began by explaining the effects of the inclusion of women in business on social life. Tozan said that all companies were turning into technology companies due to the development of technology, and that the importance of having a qualified workforce trained in STEM fields increased as a result.  Tozan argued that women would have a lot of work to do as roles were being redesigned in the new world, and that women needed to make an even greater effort to be a part of the business world as it was traditionally dominated by men. Defne Tozan stated that she was fortunate to be working for an equal-opportunity employer like IBM, and discussed the investments made by the company in women. Tozan concluded that Turkey's welfare depended on girls who read and think, and woman directors in business. 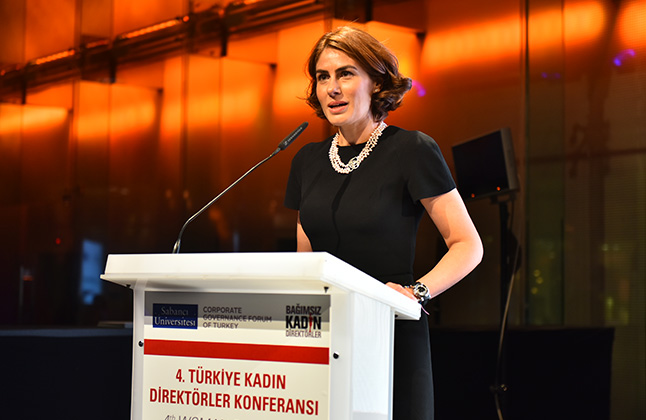 The keynote speech was followed by a presentation by Egon Zehnder International London's Global CFO Services President Çağla Bekbölet on Egon Zehnder’s Board of Directors Practices. Çağla Bekbölet said, “Egon Zehnder London office has been the leader of diversity and inclusion in executive and board appointments, and has been working actively on the representation and expression of different ideas and backgrounds for the last five years." She explained that Egon Zehnder started an inspiring campaign in the UK to have woman CEOs and CFOs in 25 of the 100 companies listed in the FTSE100 until 2025. Saying that the public and business awareness campaign received great interest and support, leading to an increase of woman CEOs from 5 to 7 and the appointment of 12 woman CFOs in FTSE100 companies in the first year alone.

“The essence of the Independent Woman Directors Project  is better governance.” 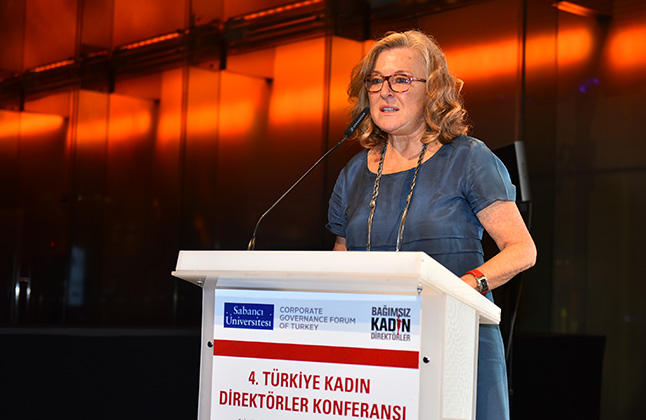 The closing speech was delivered by Independent Woman Directors Project Advisory Board Member Sibel Asna. Sibel Asna said that she could not fathom the difference and inequality between women and men, and that although the difference was ostensibly attributed to religion, customs and traditions, concerns about power, economics and sharing wealth were the true underliers. Asna said that the wealth in dispute was about to be depleted, arguing that the essence of the Independent Woman Directors Project  was better governance: “The only way out is a fair and egalitarian governance model that puts the human and sustainability in its focus." Asna said that the way to achieve this was equal representation of men and women in decision-making bodies.

Asna said that the sensibilities of women regarding sustainability were much greater than men either due to human nature or the roles given to them, continuing: "We continue to ignore or deny the fact that the real problem of the world is sustainability and that the first step in correcting it is equality of women and men in decision-making bodies. If we want to leave a habitable world to our children, we must put an end to this denial. It is inevitable that we demand from the traditionally male-dominated society the emergence of a system that includes and embraces all differences."

Asna said that the Independent Woman Directors Project made efforts to hold regular meetings, idea and experience sharing opportunities among the 276 women included in the database, and that the Project helped many women to become appointed to executive roles through training programs. Concluding her speech, Asna emphasized the importance of supporting and being involved in this initiative.